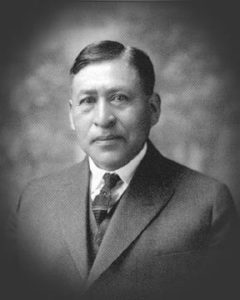 Henry Sicade was born at Squally in Pierce County. He was a son of
Charles Sicade and Susan Stann, daughter of Chief Stann of Puyallup. Henry
attended the Puyallup Indian School for over seven years. Upon the death of his
parents, Henry left the area to attend a trade school in Oregon. He attended
college in Oregon and finished four years of course work in three. Doctors
advised Henry to spend a lot of time outdoors. The life of a cowboy seemed to fit
the bill. Henry spent several years as a cowboy in Eastern Washington, Idaho,
and Montana. One story has it that Henry rode for a while with Calamity Jane
and her gang. He saved his earnings and journeyed to the east coast. In 1886
he returned to the reservation to claim his mother’s 122-acre allotment.
Unfortunately, unscrupulous Indian agents somehow misread the claim and there
was no land left by either parent.

Henry tried to work from within the system in order to improve the life of
the Indians. But he resigned when it became obvious that change was not going
to happen. He married Alice Lane, daughter of Chief Tom Lane. At 17, Henry
was elected to the Puyallup Indian Council. He became the manager of a large
ranch in the Puyallup Valley. The job combined dairying, horse breeding, and
hop raising. He and his family settled in Gardenville in 1898. The deficiencies
and problems that plagued the Puyallup Indian School prompted Sicade and
other Puyallup leaders to turn elsewhere for the education of children. In 1903
Sicade and his friend William Wilton played a key roll in establishing, on their
reservation at Fife, a public school that became heavily populated by tribal
members. The success of that venture led to expanding the facility from a one-
room schoolhouse to a large two-story building.

Mr. Sicade was a life member of the Puyallup Indian Council and served
on the board of state education for Indian scholarships. He was past chairman of
the state school directors. He also served as president of the Pierce County
Pioneers and served for more than 25 years on the Fife School District Board.

His ideal in life was to serve humanity not limited to just his people. His
father instilled a love of education in Henry as well as to value kindness and
honesty. Mr. Sicade was deeply involved in developing the Fife area. He
supervised the building of bridges and streets in the area. He served as a
precinct committeeman for the Republican Party for over 35 years. Mr. Sicade
was the local registrar for the selective service in 1918. He belonged to the
Congregational Church and donated land for a building. Henry was instrumental
in procuring the well-known “Fountain at Fife”.

Henry and his wife had three sons and four daughters, all of whom
attended the Fife schools. At the age of 72, Henry Sicade died at the family
home on December 14, 1938. His wife, Alice, and his seven children survived
him. Sally Navarre, Sicade’s daughter, donated a number of books on Pacific
Northwest history that continue to be housed in the high school library.